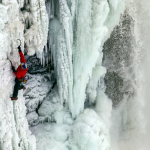 When people think of Niagara Falls they usually think about going over the falls in a barrel. Congratulations are in order to Will Gadd and Sarah Hueniken for becoming the first to ascend the world-famous falls. They climbed a 150 foot tall section of spray ice formed along the edge of Horseshoe Falls. Below I’ve posted a short video of the climb that has been released by Red Bull.

I was a member of the Red Bull production crew with Bryan Smith and Dave Pearson of Reel Water Productions. I was handling audio recording for this epic event. I had to work my audio magic to extend the range issues of wireless mics and an awesome mic placement that eliminated clothing rustle and captured Will’s comments on the full ascent.  I was donned in a climbing harness and crampons and I used the ultra-compact Sound Devices 633 mixer which worked like a charm.  All the inputs helped me deal with four climbers on wireless mics plus recording walkie radio chatter.  As a crew we all had to endure 10 hours of being in temperatures in the teens, freezing spray from the falls hitting us, and moving around on ice in climbing harnesses, helmets and crampons.  I always say that I can handle documentary sound recording and video production in the toughest environments of the world, and this wasn’t much different. 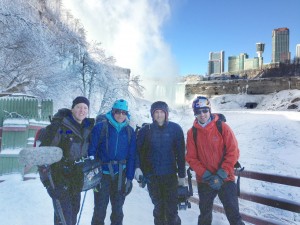 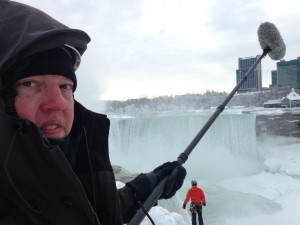 If you would like read more about the climb go to Red Bull at http://www.redbull.com/us/en/adventure/stories/1331702397954/will-gadd-ice-climbing-niagara-falls

There may be longer and more in-depth videos of the climb being released soon, but for now here is a quick highlight video of the ice climb.

I've been working some on the big production of Legends & Lies Patriots. This ...